Phil Lamb uses DNA-based approaches to ask which species have jellyfish on their menu?

I awoke on the third morning, as the hull of the ship slammed into a choppy Irish Sea. Groggily, I turned on the light, to see the coke cans I had left on the desk the night before, redistributed around the cabin. Stumbling out of my cot, I came to the quick realisation that my stomach and inner ear had been attempting to roll with the swell, like the cans on the floor. My shift would be starting soon, and I needed to eat: I lumbered out of my cabin, up the stairs, and into the canteen – I could barely manage a banana. Everyone else was despairingly chipper about the whole situation; they possessed a genuine affection for their work, and the swell was just another element of the fun. I was cheerfully informed fish were about to be on deck…

I was experiencing the autumnal sea conditions first-hand, in order to gather samples for

my research on some of the most ancient and least understood marine organisms: jellyfish. Despite being prominent in the Irish Sea, and increasing in abundance in recent decades, only rare predators such as Leatherback turtles and Sunfish are known to feed on them. This is something of a problem. Too many jellyfish can cause a variety of ecological and economic issues, such as fish death, losses to fisheries, overrunning aquaculture installations, stinging bathers, beach closures, lost revenues from tourism, and blocking cooling pipes on nuclear power plants! Understanding the ecology, in particular the population dynamics, of these mysterious creatures is a vital first step in developing management strategies.

Jellyfish on the menu?

It seems strange that so few predators would have evolved to feed on jellyfish, especially as they have been floating around since the Cambrian (500 million years!). Consequently, our working hypothesis is that jellyfish predation may actually be widespread and the perception that predation is rare arises from limitations in the techniques we use to uncover who is eating who. Observing predation under water is difficult (although some cool research has been done with cameras attached to marine organisms). Morphological gut contents analysis of scales and bones has been used to determine what an organism has been eating. Unfortunately, jellyfish lack these hard parts, so they are essentially invisible to this method. Working in the lab, I have developed a cnidarian (a phylum containing ‘true’, stinging,  jellyfish) specific molecular assay to identify jellyfish in predator gut contents with DNA alone, thus circumventing the need for hard parts.

A Sea of life 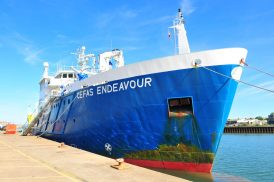 Steel-capped boots, hard-hat and oil skins donned, I made my way out to the back of the ship. A bracing wind, laced with sea spray, cut its way through the sea-sickness. A mob of Gannets optimistically trailed the boat, occasionally plunging with concussive force onto any unfortunate fish that strayed too close to the surface of the water. The winches groaned as a net was brought, dripping, high above the sorting-hopper. Although, this was the largest haul of fish I had ever seen, Cefas (Centre for Environment, Fisheries and Aquaculture Science) are very careful to use small samples to keep the impact of the monitoring and research activities to an absolute minimum.

Most of my experiences of fish had come from dinner-time or fishmongers: Ordered rows of muted greys and blues, expressionless frosted eyes, a delicate aroma of salt. However, this greatly undersells the tremendous variety of life present in our seas: upon opening the net an explosion of colour and commotion erupted from the hopper and onto the sorting tables. Lithe, iridescent, mackerel jostled with gnarled, brooding crabs while silver streams of Sprat nearly overwhelmed the table.

It was easy to be blown away by the vibrancy, and diversity of life you are confronted with. However, I had a task to do. Having assisted with sorting and weighing the fish, I began obtaining samples for my research. Inside an open-aired ‘wet room’, confronted with the swell of the sea once again, I began methodically dissecting stomachs from the fish before placing them in neatly labelled sample bags for freezing.

Over the course of three exhausting weeks, I repeated this process until my freezer space was full of frozen stomachs. Back on land, and in the lab, I carefully extracted the DNA from the stomachs of the fish and used the newly developed cnidarian-specific assay to test for the presence of jellyfish.

So, who does eat jellyfish?

The results were surprising: we demonstrated, using approximately 2500 samples (including samples from collaborators on other sampling cruises), that common species such as Herring, Whiting, Dragonet, and Lesser-Spotted Dogfish consume jellyfish (see figure left). A handful of other species appeared to feed on jellyfish too. This is quite a departure from the notion that jellyfish predation is limited to turtles and Sunfish: instead it appears that jellyfish may be an integral part of pelagic food webs. If you are interested, I would urge you to check out the video I made summarising our findings, or check out the paper here.

These results are only a first step. Although unexpected, the results by themselves can’t inform us about population dynamics of jellyfish. To address this, we are planning to use another molecular technique: high-throughput-sequencing (HTS) coupled with universal primers (a method that generates much greater quantities of data, allowing us to study many species simultaneously). Universal primers amplify a variety of prey items, and HTS is more sensitive than the group-specific primer approach employed here, so we will be able to improve jellyfish detection, while developing an ecological perspective on our findings. This will allow us to ask questions such as are jellyfish selectively preyed upon? Are jellyfish still eaten if more energy-rich sources of food are present? Does the rate of jellyfish consumption change through the year?  We plan to incorporate these findings into an ecosystem model, which will allow us explore the ecosystem-wide consequences of increasing jellyfish populations.

I am thankful for CEFAS, particularly Jeroen van der Kooji, for the opportunity to go to sea. I am also very grateful to the crew and scientists who I have worked, both those on land, and aboard the RV Cefas Endeavour: without their assistance my research would not be possible.

Philip Lamb is a UEA PhD student, funded by Cefas and NERC, using meta-genetic approaches to understand marine Food Webs. He can be found on twitter @lamb_ecology.