For a quick summary of research check out this animation; read on for more…

The conspicuous consequences of climate change

Despite some unfortunate protestations of certain world leaders; there is consensus that the climate is changing unnaturally. The mean global temperature has increased by nearly 1°C since the 19th century; it could rise by a further 5°C by the end of this century depending on societal change. A warmer atmosphere will be more volatile and hazardous, with extreme weather events becoming more frequent, intense and widespread. The past few years have been record breakers; since 2014 the global mean surface temperature has been exceeded three times and the monthly highs were broken fourteen times in a row!

Heatwaves are particularly damaging events able to melt roads and buckle train tracks. A common definition is a period of five successive days where the hottest part of the day is 5°C higher than the 1961-1990 seasonal average. It’s thought that in Europe heatwaves have contributed to more deaths than any other extreme event since the 1980s; in 2003 the death toll for a single summer incident was over 70,000! 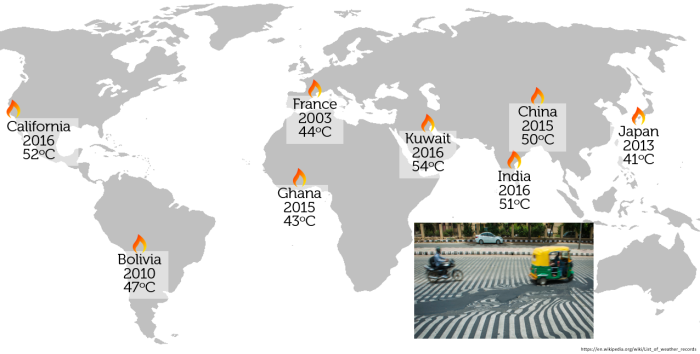 Record breaking temperatures from around the world. A road in India melting at 47°C! 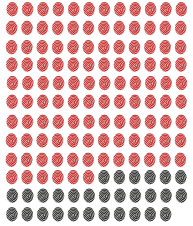 These climatic events are also damaging for natural populations. Over the past few decades there have been thousands of examples of climate change related stress responses, which are also called fingerprints.

In 2003 80% of relevant studies found fingerprints of climate change on natural populations. Large and parallel stress responses were seen in life from grasses to trees and molluscs to mammals.

A common fingerprint to a warmer world is a range shift, where a species distribution moves to higher altitudes and/or latitudes, to track their temperature Goldilocks zone (where it’s not too hot or cold for them to exist). A review of several hundred studies found an average shift of 17km poleward, and 11m upslope, every decade. However, if temperature changes are too intense, or lead species to geographic dead ends, local extinctions occur in hot areas. Another recent review again of over 100 studies, found on average 8% of all species will be threatened by climate change. However, some researchers have predicted that this is an underestimate and that over 50% of species will be impacted!

The causes of local extinctions in hot areas?

Currently, we have ‘disturbingly limited knowledge’ of what biological traits are sensitive to climate change, and are driving local extinctions. One such trait behind extinctions could have been male infertility. Innovative, and sometimes unusual, experiments aimed at improving fertility of warm-blooded humans and agricultural animals, used short and intense heat shocks to show sperm are vulnerable. 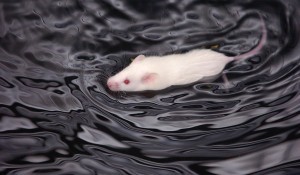 Research has demonstrated that heat shocks damage male reproduction in warm blooded animals. A range of studies have shown males are the weak link when it comes to heat by: measuring sperm counts of feverish patients, putting mice on little floats with the scrotum floating in warm water and even inserting testes back in body cavities!

However, the ‘significant yet neglected phenomenon’ had rarely been explored outside fruit flies in cold blooded animals. This is despite ectotherms being more directly influenced by environmental temperatures, and comprising most of biodiversity; nearly 25% of all species are thought to be a beetle! Studies on cold blooded animals typically would only look at offspring production. 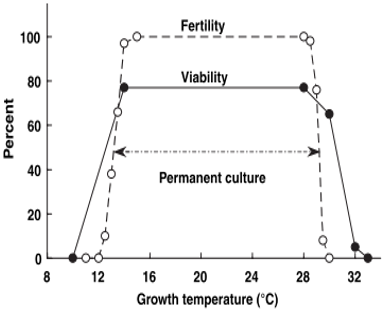 The red flour beetle, a tool for sex and evolution

While not as charismatic as butterflies and bees, the red flour beetle (Tribolium castaneum) is a great model for large experiments on reproduction. It can go from egg to adult in a month at 30°C. Males mate with anything, females, males, corpses and oats! Females can store male sperm in specialised organs called spermathecas; they only need to keep 4% of a single ejaculate to enable them to produce offspring for up to 150 days! As a stored grain pest its biology, genetics and ecology are well studied; with the aim of extermination! Our lab group has been culturing stocks for over a decade, leading to some very well established populations; an example of our previous work is on an earlier CEEC blog post.

To look at the impacts of ecologically relevant heatwaves on reproduction, beetles were exposed to either standard control conditions or 5-day heatwave temperatures, which were 5°C to 7°C above their preferred temperature. Afterwards, beetles were mated and a variety of experiments assessed the potential damage to reproductive success, sperm form and function, and offspring quality.

How did heatwaves damage male reproduction in our beetle? 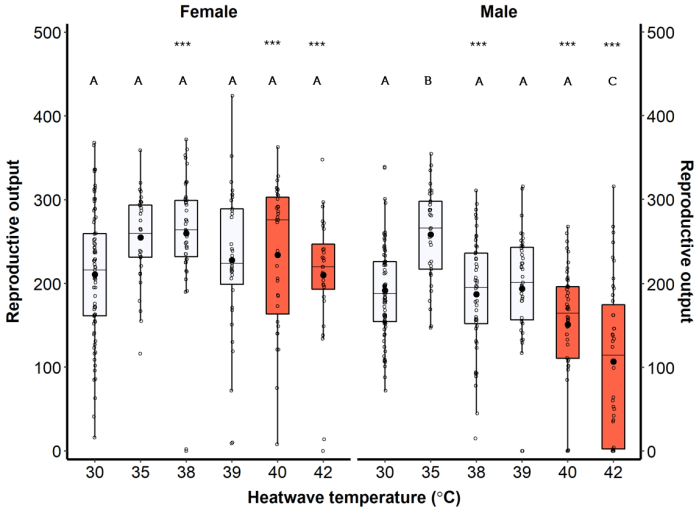 Heatwaves damaged the ability of males to produce offspring. The reproductive output produced by females after a 5-day heatwave event was similar across temperatures (left). Male offspring production was lower after a 42 C heatwave compared to heated females and control 30 C conditions.

Heated sperm were less likely to be stored in females. Images of female reproductive tracts mated to control (A) or heatwaved (B) males. Females mated to heated males on average had less sperm in their short (bursa copulatrix (bc)) and long (spermatheca (s)) term storage areas. The sperm dense areas are ones glowing green. The green glow, allowing the sperm to be seen through the female tract, isn’t caused by a dye here, but a strain of beetles modified to express green fluorescent protein from their sperm heads (similar to a strain of fruit flies used in a previous CEEC blog).

We found that heatwaves halved the number of offspring that males could produce relative to heated females and cool controls. The effect was consistent across several repeats. Neither the reproductive potential of males, or mature sperm in female storage, was safe from heatwave damage. The decline was likely due to a combination of: males becoming worse at mating, less sperm being transferred, less sperm transferred being alive, less sperm being kept in the females’ fertilisation areas and more sperm being likely to be damaged and infertile.

Two results were particularly concerning. These beetles, and many cold-blooded animals, can live for  years and are likely to see multiple heatwaves. When we exposed males to two heatwave events, 10 days apart, their offspring production was less than 1% of unheated males. This suggests a compounding effect of re-heating. The transgenerational damage to offspring longevity and male fertility was another compounding effect over successive generations which could lead to spiralling population declines.

The experimental work here helps us understand what aspects of biology climate change could be compromising. Hopefully, the effects can be incorporated into models predicting species vulnerability, and ultimately help inform societal understanding and conservation actions. Future work explores whether male reproduction can mitigate the effects of heatwaves in the immediate lifetime, by plasticity and/or through evolution across generations.

The work was made possible thanks to studentship from the ENVEast Doctoral Training Partnership, funded by the Natural Environment Research Council (NERC).

Kris Sales is an evolutionary ecologist primarily interested in how selection, like climate change, shapes reproduction, behaviour and lifespan. His research uses invertebrate models in large controlled laboratory experiments. He can be found at K.Sales@uea.ac.uk, https://matthewgagelab.com/people/krissales, @KrisSales1992.